Iguazu falls things to do 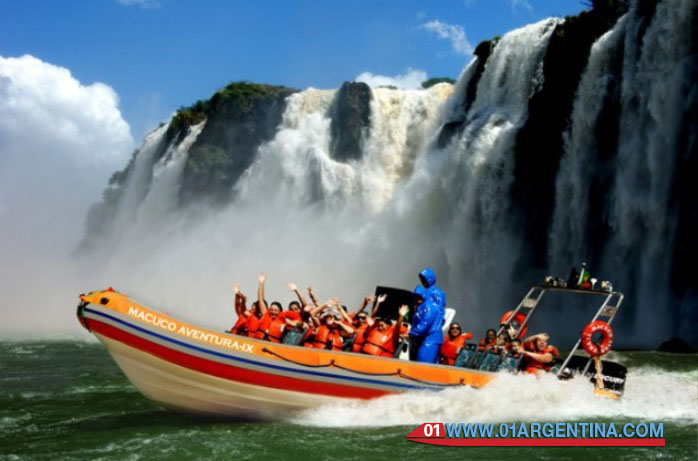 Milestone of the 3 borders

At the confluence of the borders of Argentina, Paraguay and Brazil, this place is located with a great biodiversity, a fabulous, surprising and exuberant vegetation as it is all the zone of the forest, place in which besides and surely the most important of Everything is that there is the Guaraní aquifer, one of the most important natural reserves of drinking water on the planet. There are the famous Iguazu Falls in the middle of a fabulous vegetation, among orchids and bromeliads, with the air loaded with the aroma and sweetness of the flowers and the buzz of the insects attracted by them. The smell of damp earth, foliage, wood, the trill of hundreds of birds of various sizes and colors that appear and disappear, like the brilliant butterflies of incredible colors and even more incredible sizes. Also in the middle of the jungle that once surrounded everything and the man, in the name of progress, was responsible for disassembling it in large part, we can visit one of the largest dams in the world the Tourist Complex of the Binational Itaupú. Paraguay and Brazil. It’s a single photo but I think it says it all.

Magnificent place known especially for its deposits of semiprecious stones, turquoises, amethysts and rock crystal. The mines were located in 1976 and since then have become a must for all those who come to the Falls. In its interior origin agates, jaspes, topazes, among other varieties, and can be acquired by the tourists that come to know this exciting place.
The stones extracted from the mines are turned into gems and used for jewelry making.

The house of the birds Puerto Iguazu, Misiones, Argentina

Güira Oga is a center for the recovery and breeding of birds belonging to the Paraná forest whose existence is threatened. From here, programs are developed for the captive breeding of species in danger of extinction, as well as plans for the recovery of individuals injured or seized by the authorities. Other functions include bird rehabilitation and formation of educational reserves.

According to legend, this site of great tourist importance owes its name to a Polish princess who was very affected to these gems.
They are located 40 kilometers south of Puerto Iguazú.

Faithful testimony to the ancient cultural life of the region, the circuit of Jesuit Ruins inserted in the province of Misiones allows us to know step by step the history of colonization and evangelization of natives at the time of the European conquest of the American territory.
The route stops at more than one site where the ruins still dominate the landscape. Some possessors less hierarchical than others, but all deserving to be known, the various reductions (peoples integrated by indigenous communities gathered to be catechized) invite to travel in time to live in own flesh those events.

In the access to the Ruins of San Ignacio Miní, the most outstanding and recognized of Misiones, the Center of Interpretation and Recreation Jesuit-Guaraní presents nine rooms that by way of historical narrative reconstruct the past, since the arrival of the first Spaniards, including A model of what were the reductions, and culminating with an exciting and educational show that, through lights and sounds, revive what happened between the 17th and 18th centuries.
In a more natural state and mimicked with the jungle that surrounds them, other smaller ruins exhibit their vision of the facts. The Ruins of Our Lady of Candelaria, located at 19Km. Of Posadas; The Ruins of Santa Ana, located at 40Km. Of the provincial capital; The Ruins of the Mission of Our Lady of Loreto, located about 10 km. beyond; And the Ruins of Santa Maria the Major, that appear passing Itacaruaré; Are the subsequent breaks in this itinerary of great cultural and religious importance.

An interesting architecture, ornamented with figures in which the clear Guaraní imprint can be seen, constitutes the main part of this magnificent tourist-cultural attraction that allows to discover the way of organization of the city in the times in which the square and the temple functioned like Structural axes.