Night and Day the Rainbow in Iguazu Falls 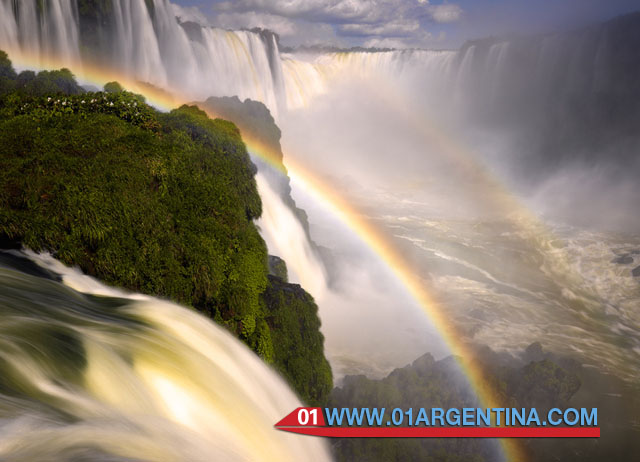 On sunny days the rainbow and full moon nights (full moon) forms the phenomenon is repeated in the Iguazu Falls.
Five nights a month, when the moon offers the best view, a walk is done by the upper circuit that has the plus of the night rainbow show.
The proposal begins with a train ride from the Central Train Station and La Selva from Cataratas Station, begins the walk between wet vegetal aromas.
How the rainbow is formed
The rainbow is a meteorological phenomenon caused by the appearance of a frequency spectrum of light in the sky. It happens when the rays of solatraviesan water droplets in the atmosphere, creating a multicolored arc to human eyes. If you are interested in how and why the rainbow is formed, we give you detailed information on this subject.

You can enjoy the night Rainbow in Iguazu Falls in full moon nights and is a very beautiful experience.
The best place to see it is from the Devil’s Throat, the main jump Iguazu Falls is one of the most interesting activities to do in the Iguazu Falls, the sad thing is that only for a few nights a month, during nights full moon.

The night rainbow is a phenomenon that occurs by the passage of moonlight through tiny water particles which are dispersed in the air, when water falls hard in the waterfalls.

In the area of the Iguazu Falls at night the forest is magic in its purest form, perfect combination of the mist produced by waterfalls, silhouettes and shadows of the trees dimly lit by the moon and all accompanied by the sounds of jungle: a melody of crickets, cicadas, rustling leaves flapping in the breeze, accompanied by the sound of water falling from a great height.

In the dimly dark night studded with stars where reigns the moon bathed with light the towering waterfall, emerges from the back of the throat a set of seven vertical and parallel to jump colors: the wonderful rainbow definitely the natural spectacle more stunning, shocking and wonderful I’ve seen so far … and that has been burned into my retina.

Only nature and fantasy can create such a spectacle, it is no wonder that the Indians believed that the moon, the sun and even the river were gods, because the man with all his monumental works of architecture, can never match the rainbow they can “draw” water and light at night.

Practical information to watch the night rainbow from Puerto Iguazu (Argentina).
The visit can be done in 3 ways:
Staying at the Sheraton which is located within the Argentine National Park.
Getting travel to the park entrance (should be taxi line because buses were not working at night) and it is necessary to agree the wait and return with the driver.
An excursion in Puerto Iguazu, there are many agencies that offer and if you are one or two may be more interesting the price catch a taxi, because I remember it was “cheap”.

In all three cases visitors gather at the information center and then access the Devil’s Throat in the ecological train that runs through the park.
Once in the gorge there is enough to enjoy under the full moon falls and rainbow magic time.

I do not know if there are private visits but despite not alone but with dozens of tourists, the show is unique and if you doubt when I will return to Iguazú full moon night …

Legend of the Rainbow

In the Iguazu Falls, located in Puerto Iguazú, Misiones province, in the most impressive attraction called “Garganta del Diablo” sunny days you can see permanently a rainbow that draws the attention of all tourists and around there is a legend that the atrapante.
Tourism has this legend Argentinate you know why this stunning beauty that can be seen in the Iguazu Falls.

Legend has it that in the beginning of time, inhabited the river Iguazú a huge and monstrous snake, a guardian god Tupa’s son, whose name was MBOI (Viper in Guarani language). The Caigangues -tribu guaranties of the region should, once a year, sacrifice a beautiful maiden and give it to MBOI, throwing her into the river, which then circulated mansamente.Para the ceremony all the Guarani tribes were invited, yet to the uttermost. It was so arrived at the head of his tribe, a young chieftain whose name was Tarobá.

Upon meeting Naipí, the beautiful maiden that year was devoted to sacrifice, he rebelled against the elders of the tribe and vainly tried to convince them not to sacrifice to Naipí. Faced with the denial of the elderly and to save his love so cruel fate, he thought only of kidnapping her and the night before slaughter charged to Naipí in his canoe and tried to escape down the river. But MBOI, who had heard this, he was furious and his anger was such that, hunching his back, left the river forming the falls, trapping Tarobá and Naipi.
Covered by water, the boat and the escapees fell from a great height, disappearing forever. But fearing that love MBOI youth unite them in the past, he decided to separate them forever.
Naipí was transformed into one of the central rocks of the falls, perpetually punished by a riptide, and Tarobá was turned into a palm tree located at the edge of an abyss, leaning over the gorge río.Luego to cause all this havoc, MBOI he plunged into the Devil’s Throat, where watches the lovers, preventing back together. But on sunny days, the rainbow exceeds the power of MBOI and joins Tarobá and NaipiNight and day the Rainbow is in iguazu again as a bridge of love.