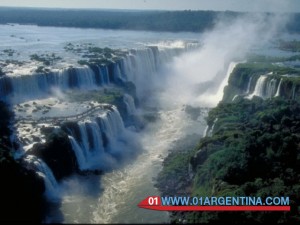 The Iguazú National Park is the first in South America that managed to get the quality standard for the services provided and the commitment to the care of the environment.

The World Environment Day (WED) is one of the main tools of the United Nations to promote awareness and action for the environment worldwide.

Throughout the years, this celebration has grown into a global platform in which people participate more than 100 countries. Furthermore, it is YOUR DAY, the day on which it can act on the environment, so that the sum of all individual actions generate a large positive impact on the planet.

Iguazu Falls in environmental policies are implemented to operate under internal quality standards ISO 14:001.2004. In this sense, Iguazu Argentina, concessionaire of the Niagara area, working in conjunction with National Parks Association (NPA), whose main objective is “to increase efforts to achieve sustainable development of the activity preserving the ecological balance.”

Thus, there is inside the park the “Ecological Jungle Train” to transport visitors in order to eliminate animal deaths by collisions with cars. The course was designed in England by Alan Keef Ltd. exclusively for Niagara. Trains travel less than 15 km per hour and are powered by liquefied petroleum gas which causes less environmental impact. It is necessary to mention that the layout of its roads was made on old roads that were environmentally degraded areas. In addition, the long rail track there are 13 pasafaunas to allow animals to pass underneath. Finally, the “Ecological Train” was designed to open in order to harmonize with the environment manterner walking. 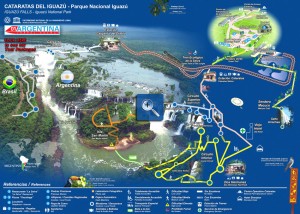 Furthermore, the renovations that have been made in the National Park have fundamental premises increase the attractions for visitors to expand and diversify the offer mitigating the environmental impact caused by the influx of people. To do this, we used a modern architectural concept without harming your main attraction is nature, has improved with excellent walks gateways that enable a single view of the falls; besides the nature trails that maintain direct contact with the flora and fauna of Holy Forest.

This is how from the beginning in Iguazu Argentina to undertake concrete actions from which we can highlight the waste management program consisting of the separation of organic and inorganic established; gateways floor “grating” that allow the passage of light and water; the use of mechanical and biodegradable cleaning products; the reparquización areas that were formerly cleared; etc. On the day of the environment is necessary to remember the importance of caring and strengthen, diaramente, commitment and respect that it deserves.

The World Environment Day is the time to realize that caring for the earth is everyone’s responsibility and become agents of change.

Last year, the World Environment Day was quoted in a total of 200,000 blog posts and over 26,000 press articles published only between 1 and June 10, 2013. Our videos for World Environment Day were seen by about 120 million people in the digital screens in Times Square in New York, Piccadilly in London and Windows Live (Benetton stores) in Milan, London, Munich, Barcelona and Almaty. Than 200 million active users of Twitter, the World Environment Day became a “trending topic” from at least 15 countries during the June 5 turn causing an estimated 47.6 million impressions on Facebook figure.

The celebration of World Environment Day began in 1972 and has since grown to become one of the principal vehicles of the United Nations to encourage positive action for the environment.