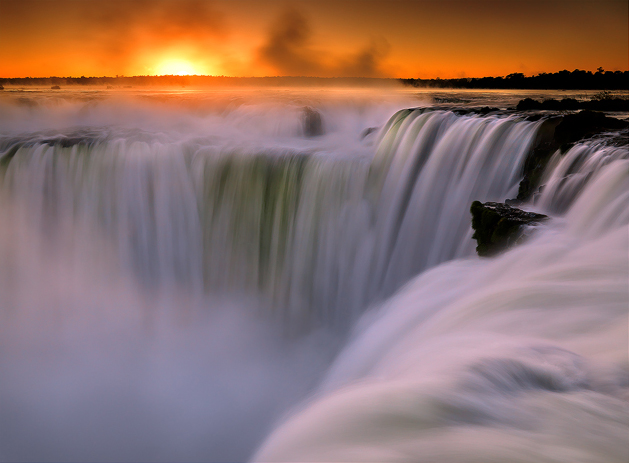 Every time I look at the Iguazu Falls I discover a different spectacle, “said Bertrand Weber, president of the foundation that set out to choose the seven Natural Wonders of the World. The Iguazu Falls are in the select group of the wonderfull of the world “I have seen them with more water, less, with sun, in the rain, during the day and at night, and every time I have a unique sensation.”
It is likely that this changing, kaleidoscopic, always surprising feature of the Falls is one of its great assets when it comes to competing with the greatest natural treasures of the planet. And among all these “visions” it is necessary to emphasize, also, the one that takes place during the nights of full moon, an uncommon show and loaded with romanticism that summons travelers from all over the world, who often organize the itinerary of their visit To the Caratas to coincide with those dates. And it is that any organizational complication will seem little when you are in front of the Devil’s Throat, ecstatic with the ghostly vision of a sea of ​​fresh, powerful and deafening, exploding in the midst of darkness.

And the night became day

Each month there are five exits under the moonlight, in which nocturnal walks take place that transit through the Iguazu National Park until arriving at the mythical Throat of the Devil. Organized by Iguazú Argentina, the routes leave from the entrance of the park and begin with a crossing in the Ecological Train of the Jungle. Designed in England, this tourist railway, with open wagons, crosses different areas of the national park, in a parsimonious walk of 3.6 km that at times passes by the waters of one of the arms of the Iguazú River. During the full moon rides, the guides especially ask visitors to keep quiet, so that they can hear the chords of nature. Thus, with the clac-clac of the train, the distant howls, the rustling of the trees and the sounds of infinite insects intertwine to form the score of the nocturnal music of the missionary jungle.
After the charming train ride, you arrive at a small and very “british” station from which the footbridges that lead to the Devil’s Throat, end point of the crossing, leave. In recent times, the runway circuit has been renovated, replacing the old corridors with a system of folding footbridges, which fold when the fierce floods of the river arrive, so as not to be ripped out, as has happened in other occasions.
Illuminated only by the dying glow of the moon, which rises to the top of the sky, visitors go through this magnificent circuit of footbridges passing through pieces of closed forest, in which the night conceals the latent presence of its inhabitants (monkeys , Tapirs, fantastic birds). As he approaches his destination, the runner flies over the widening, swelling arms of the great river. The roar of the waterfalls becomes more intense, more imminent, and even in the middle of the night it is possible to see the imposing columns of water-vapor that emerge from the throat.

A toast in the middle of the jungle

When you are missing a few hundred meters for the end of the tour, it is almost impossible to keep a quiet step. They want to run away. The spectacle of the Garaganta del Diablo, the most spectacular of all the jumps that make up the Iguazu Falls, has a hypnotic effect. It is a call of power, the fury and beauty of nature, which under the influence of the missionary moon reaches levels of emotion difficult to describe in words. And it is an undeniable patriotic pride to see the touched faces of so many foreign travelers from the most diverse places in the world to enjoy here one of the most fascinating sensations that nature can offer.
After spending a good time on the balconies of the Devil’s Throat, discovering shapes and postcards that are only given in these nocturnal walks, we start the way back. The full moon stroll culminates with a dinner in the restaurant “La Selva” and then, almost at midnight, with a toast of caipirinhas and daiquiris in which a lot of Japanese, Brazilians, Spaniards, French and Argentines clashed our glasses for To celebrate having had the fortune of living this unrepeatable experience.